Seismometers are located at all but the Folger Passage Node (which is too noisy) comprising the seismograph network. Data from the seismometers are directed to the Incorporated Research Institutions for Seismology (Step-by-step instructions for viewing NEPTUNE Canada seismic data on IRIS) and the Geological Survey of Canada's National Seismograph Network where they are used, together with data from land-based instruments, to locate global seismicity and regional events around the Juan de Fuca plate. The data also allow for detailed studies to be conducted in locations where the instruments are installed. At Endeavour, the instruments provide the basis for interdisciplinary collaboration in the analyses of earthquake-related events at a mid-ocean ridge. (NEPTUNE Canada: An Invitation to Science, 2012).

Short period seismoters have a short natural frequency and a high resonant frequency, higher than most frequencies in a seismic wave. When an earthquake occurs, the displacement of a short period seismometer is proportional to the acceleration of the ground. This is why these instruments are also called accelerometers. These type of seismometers are designed to respond to frequencies of 1 Hz - 10 Hz, where amplitude of the strong ground motion would swamp a normal displacement seismometer. (QVS Data Program) 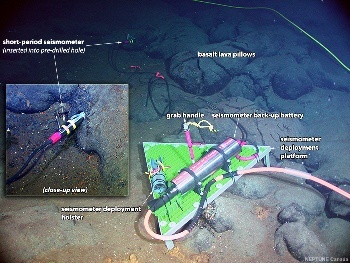 Above: Short Period Seismometer on the Seafloor.

Broadband seismometers have an inertial pendulum design with a force feedback mechanism. These type of seismometers are designed to respond to frequencies of 0.1 Hz - 1 Hz. Seismic signals in this range can be hindered by "microseisms" which are natural background noise that include action of storm waves and deep swells at sea. Waves hitting a beach or interference of waves over deep water are sources of low amplitude seismic noise. Broadband seismometers have a large dynamic range, which is the range between the strongest and weakest signals and that are recorded by the instrument without distortion. For broadband seismometers, the dynamic range extends from ground noise up to string acceleration that comes from major earthquakes. (QVS Data Program).

All components of the Ocean Bottom System (OBS) are encased in a cast titanium sphere capable of 3000m deployment. A submersible 25-pin provides inputs for an external Nortek Current Meter and a Differential Pressure Gauge. These instruments comprise the "Auxiliary Platform" of the Broadband Seismometer system.This auxiliary platform holds a back-up battery to power the seismometer in event of a power outage. Additionally, the Nortek Aquadopp current meter and a differential pressure gauge can be used to help seismologists detect and remove current, tides and wave signatures from seismic data. 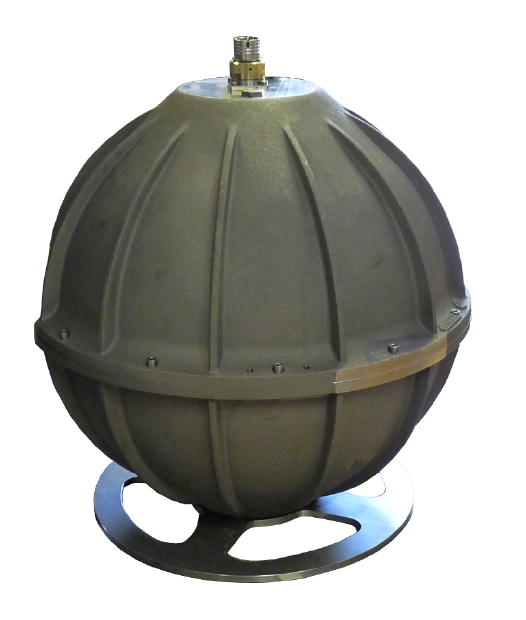 Above: Guralp Ocean Bottom System (OBS) is a cast titanium sphere that encases the broadband seismometer and accelerometer instruments.

In September 2011, a BPR instrument was installed at Endeavour RC North with a Short Period Seismometer (SPS). The logging units of the BPR share the can and the battery with the SPS electronics. The Paroscientific Pressure Gauge sits in its own pressure housing and has a connector to the SPS can. This combined BPR/SPS system will also be installed at Endeavour Mothra in Summer 2013.

Reports and publications relevant to seismomters installed on NEPTUNE Observatory