Regional Circulation (LBOX) Moorings will provide Serial to Ethernet conversion electronics and power distribution control to each of the four Endeavour Ridge moorings (NE, NW, SW, and SE). The box is based on PC104+ stack computer modules and powered by Vicor supplies. With surge suppression handled by a DCP-90. The L-Box will be responsible for the serial data stream of each instrument on a mooring (specifically RDI ADCPs, Nortek ACMs and SBE CTDs) and transferring the data to the Ethernet. It will also provide a means to control power to each instrument in case of an electrical current leak or failure of a specific instrument.

The NEPTUNE Regional Network circulation moorings help scientists estimate ocean currents within the axial rift valley, and gauge the effects of hydrothermal venting on those currents. There are four moorings that provide a comprehensive picture of circulation in the area. The upper most instrument on the moorings is an ADCP; below this are four instrument pairs distributed along the length of the mooring at depths of 200, 125, 50, and 5 meters above sea bottom. Each pair of instruments includes a CTD and a current meter. A float at the top of the mooring keeps the instrument array in a vertical orientation.

The moorings will be used to gather data and develop 3D models and visualizations of circulation in the region. (NEPTUNE Canada: An Invitation to Science, 2012) 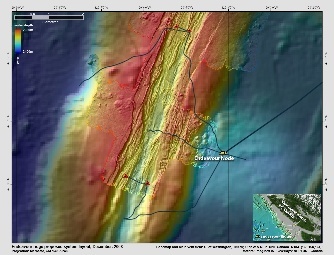