The gravimeter, a.k.a Seafloor Compliance Meter (SFC), was initially deployed at ODP 889 on the NEPTUNE Regional Network. The gravimeter uses a seafloor compliance method to monitor changes in the stiffness of the hydrate zone on the ocean bottom. As the seafloor responds subtly to pressure variations, caused by waves at the sea surface, the motion is detected by the high-precision gravity meter, or gravimeter. Pressure changes are also continually measured by a differential pressure gauge (DPG). Over time, data gathered by these two instruments can provide insight into the composition and evolution of gas hydrate deposits at ODP 889, near the Bullseye Vent.

In the summer of 2013, the gravimeter will be deployed at RCM North Endeavour, in the NEPTUNE Regional Network. 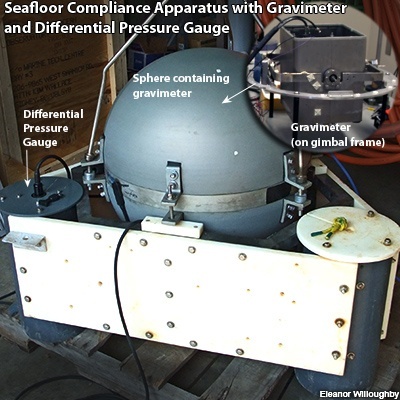 The gravity meter is placed in gimbals which are carefully balanced so that it will naturally swing into a level position when deployed. Click to enlarge photo.